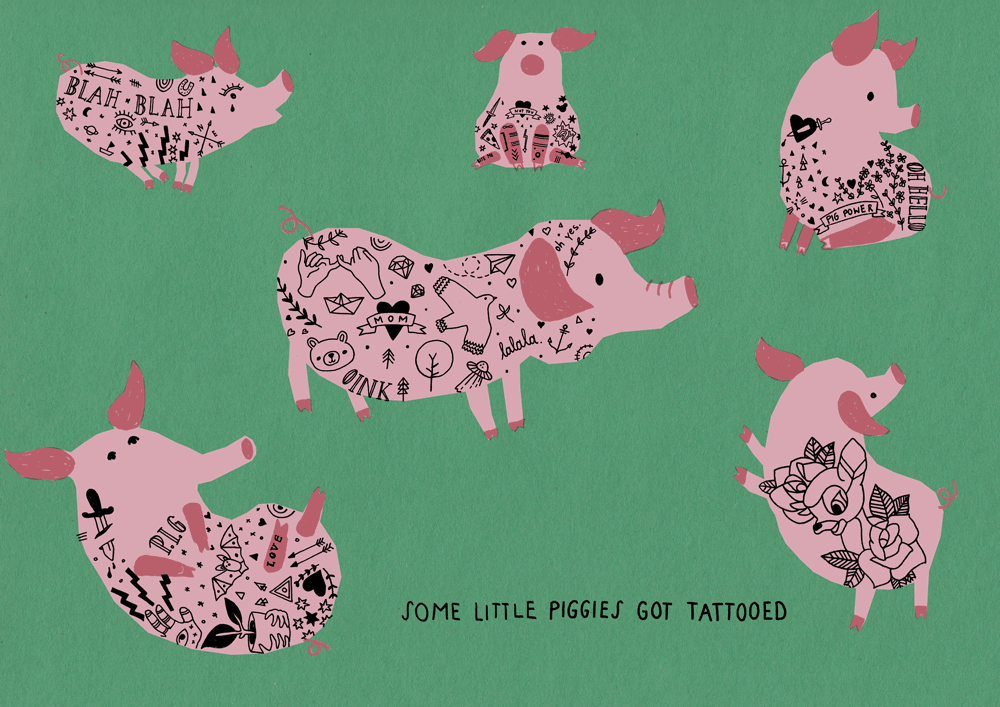 By tattooing pigs, Belgian neo-conceptual artist Wim Delvoye was the talk of the art world – and animal activists.

In 1997, Delvoye started inking piglets all over the US, Europa and Russia. This of course led to conflicts with activists and caused problems with animal welfare regulations. So, from 2004 until 2008, he opened his Art Farm near Beijing where animal protection laws were virtually non-existent. During this time the artist and three other tattooists went to work on about twenty pigs. They were decorated with symbols of western iconography: from Louis Vuitton monograms, Disney characters like Arielle and Snow White to drawings of Jesus or designs usually used by Russian prisoners. Buyers then had the opportunity to purchase the animal skins for up to $69,000 (about 65.000 €) a piece – either as a living or taxidermy version. Some sources claim Delvoye let the pigs die of natural causes, while others state they were slaughtered. The Daily Mail reported, that the fashion house Chanel bought two pigskins with Disney characters in order to make them into bags.

But, why did the artist pick the snouted animals as canvases? Delvoye states, that the parallels between humans and pigs intrigued him – for instance having similar organs. While western medicine uses pig parts as replacements in human bodies, some cultures also associate the animals with filth, greed and gluttony.

The ethics of art

Unsurprisingly animal advocates heartily criticized Delvoye: they argued, that animals can feel pain similar to humans when being used as living canvases. He was also accused of using these pigs for gaining commercial profit.

Devoye countered, that ‘his’ pigs enjoyed a much better life than those exploited by the food industry. Why? Well, the piglets were only tattooed for two hours per week while being under full anesthesia (although the pig in the video below seems pretty awake). They were also cared for by two vets and had plenty of living space.

See how the artist works:

He may have a point: it is no secret that animals in factory farming facilities are branded or tagged without anesthesia. Many piglets also get their tails clipped to avoid being bitten off by other pigs.

Wim Delvoye is actually no stranger to the art of inking: in 2008 he embellished a man’s back with a skull and the Mother Mary. Similar to his piggy counterparts, Tim Steiner’s back piece was sold for about $159,000 US-dollars (150.000 €).

But, how do you sell your tattoo? you may wonder. Well, as part of the deal Steiner has to present his back-art to the public for three or four weeks annually. When he dies the part of his skin will go to the buyer or his heirs. All photographs by Wim Delvoye