Pork Chops Made by Horses 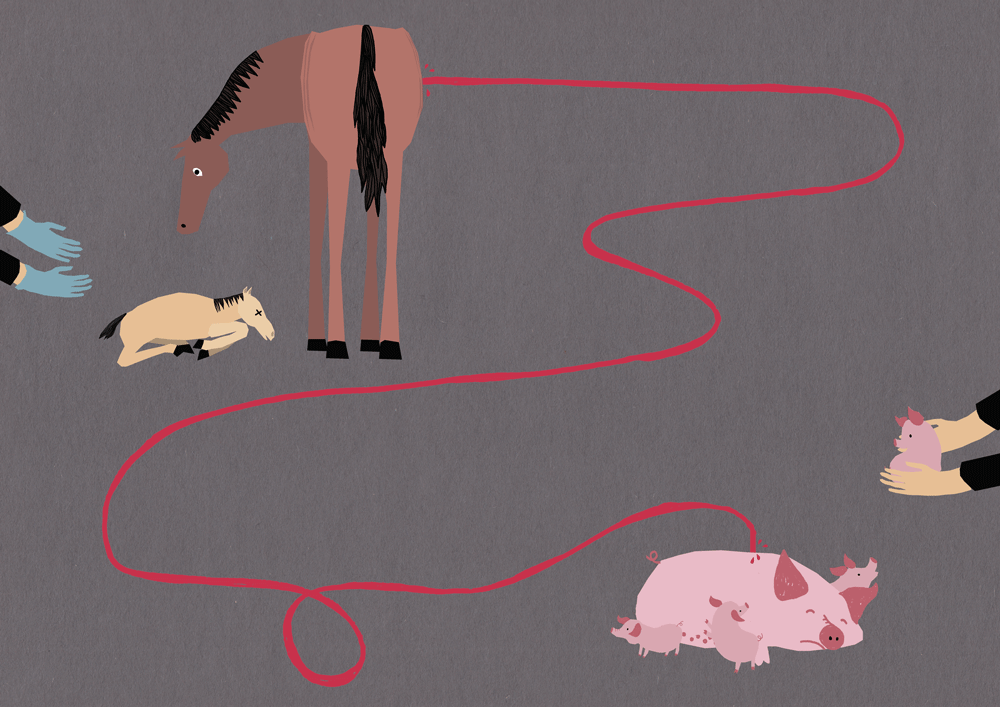 PMSG – a serum sourced from the blood of pregnant horses – is injected into female pigs. It is used to make them become pregnant faster and more often.

Ok, let’s break this down, because this practice is pretty disturbing: horse blood-farms are probably a topic you are completely unaware of. Although it is a very secretive industry, it is also worth billions. In 2015, animal welfare organisations joined forces to uncover the brutality behind the business of horse blood.

Animals’ Angels, Tierschutzbund Zürich and Animal Welfare Foundation visited horse farms in Argentina and Uruguay. Some of the largest producers of PMSG for the company Syntex are found here. In 2014, this enterprise exported products worth $8 million– just to European countries.

As the name suggests, the serum is only found in the blood of expectant horses: they usually produce it between days 40 and 130 of their pregnancies. During this time as much blood as possible is extracted from the animals. Informal regulations suggest withdrawing between 15 and 20 percent of total blood volume over a four-week period.

Obviously, the manufacturers do not especially care for these ‘guidelines’: former farm workers report that regularly 10 to 20 litres are pumped from a single horse in one extraction. Not without consequences: the pregnant mares are weakened, collapse, become anaemic and even die.

In an article about this topic, veterinary specialist Rupert Ebner tells the German newspaper Süddeutsche Zeitung: “5 litres per week at the most would be acceptable and only under veterinary supervision.”

As the serum is exclusively produced during the animal’s gestation, they are repeatedly impregnated. Therefore abortions are also typical. Farm workers ‘simply’ destroy the mother’s gestational sac with their bare hands. If a foal is born and it is female it follows in its mother’s footsteps and also becomes a donor horse. Males are usually sold for slaughter, as are older mares that cannot reproduce anymore.

Remember the 2013 scandal in Europe, where horsemeat was sold as beef in lasagne and Bolognese sauces? Could some of that meat have come from these horses?

And this is by no means the end of the cruelty. Footage, shot during the undercover investigation, shows workers beating the animals with sticks and electrical prods. Between the blood draws they are left to fare for themselves in fields. Nor are they treated for illnesses or miscarriages and can be left for dead. Most of the horses are obviously underweight.

Similar farms to those in South America can be found all over the world – from the United States to Australia. There are no specific laws or regulations to protect how these horses are handled or how often and how much blood is collected. See the undercover footage (warning, it contains graphic material):

Alongside the producers there are several international companies involved in trading horse blood.

The serum is used by the pharmaceutical industry to manufacture drugs. These induce heat in pigs in order to achieve faster, more controlled reproduction cycles. The manufacturers promise less recovery time for the animals after birth, so they can ovulate soon after again. Systematically synchronizing pregnancies in one farming facility means a lot of piglets can be sold at the same time.

The German company IDT Biologika, for example, makes a lot of promises with their PMSG drug:

Wait, what? The whole process of pumping one animal’s blood into another animal has nothing to do with nature.

Usage of PMSG in Germany

In 2016, there were just over 27 million pigs in Germany. According to an article in the Süddeutsche Zeitung, 80 percent of German pig producers use PMSG-drugs to accelerate the reproduction process. The German Central Association of Pig Production denies this number and states that merely 15 percent of producers use PMSG. However, as there is no compulsory registration for the drug, nobody really knows who uses it and in what quantities.

Historically horse blood was a component in vaccines for humans. However, since many people developed severe allergic reactions to the substance, it is no longer used. It is still found in anti-venom medicines and in vaccinations for livestock.

The oh-so-ironic conclusion? Basically horses are being impregnated and their foals aborted in order to get pigs pregnant, so that we can eat their piglets. The solution may lie in science – but it is not there yet. Apparently the synthetic alternatives are not as yet effective enough.

Interestingly none of the articles, blogs and other sources I read, suggested reducing our consumption of meat. What do you think?

You can read the full investigation report by Animals’ Angels here.