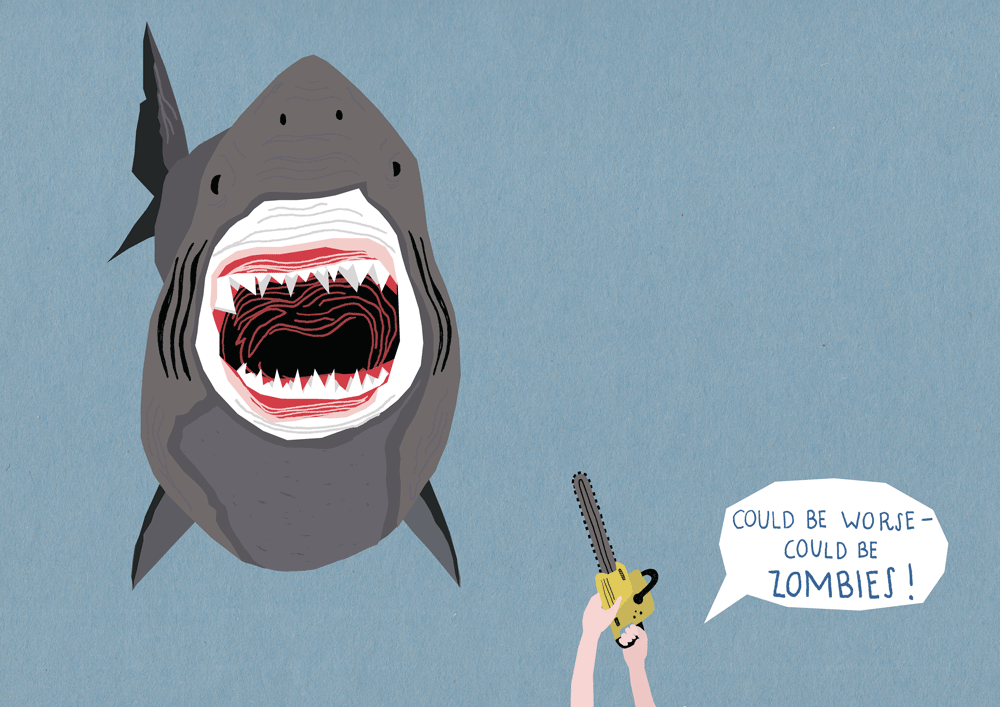 Summer of 1975: Jaws fascinates cinema audiences worldwide. But then let’s get real: all shark-related movies released after Jaws were pretty trashy (including its sequels). The real victims are no longer the humans but the sharks themselves: bad computer animations, even worse acting and totally predictable plots. What do all of these movies have in common? They obviously ignore the fact, that humans are not part of the natural food plan of these aquatic animals.

Here’s a list of my favorite ludicrous shark movies:

Ellen Brody wants to take revenge on the shark that tore her son to pieces. Surprise: otherwise mostly successful actor Michael Caine is a member of the cast. No surprise: the movie is regarded as one of the worst ever made. It was the fourth and fortunately last film in the Jaws franchise.

Genetically modified sharks as a cure for Alzheimer’s disease. Shame, that the experiments made the sharks highly intelligent. Therefore they are even more efficient at hunting the scientists in the underwater laboratories deep down in the ocean.

Not even Samuel L. Jackson can escape: during one of his motivating speeches he is interrupted and – you guessed correctly – eaten. Chomp!

Oh snap! The prehistoric mega-shark Megalodon is accidentally brought back to life. Who does he terrorize? Girls in skimpy bikinis and art thieves! Includes this ‘effective‘ slow motion shot:

A shark with not one but two heads! Double the skulls, double the drama? Well, yes – because it’s a two-headed shark in an earthquake zone!

If you’re still not satisfied you may want to watch 3-Headed Shark Attack (2015).

A massive shark fights a giant octopus for ultimate power over the ocean. As always a huge number of innocent humans become their victims. Best scene? Mega Shark plucks a plane filled with vacationers from the sky:

Half shark, half octopus! The only way to defeat this terrifying beast? Well, of course, with explosives! A staple found in every Hollywood shark-hunter’s inventory.

Sounds familiar? Prehistoric sharks are released due to an earthquake and wreak havoc on a party island. What makes them more dangerous than other aquatic monsters? Crap! They can literally swim through the sand!

Even Canada has its own horror swimmers: an avalanche awakens ancient snow sharks and they start hunting skiers and snowboarders. And what the movie also can’t do without? Whirlpools and high-pitched screaming girls in bikinis… because, duh!

Another shark hit par excellence! Killed shark is resuscitated by Native American shamanism and returns as ghost. Its new found power? It can move through every available water source – from the bathtub or a water dispenser to a car wash.

Real slice(s) of heaven: this franchise is so catastrophically awful that it somehow makes the movies pretty fun to watch.

During several bad storms tornados transport numerous varieties of sharks and let them rain down on Los Angeles, New York City, Washington D. C. and well, basically every other town in the US (and, of course: outer space).

Despite, or probably just because of it’s poor quality, the Sharknado movies quickly became cult movies. Alone 5,000 Tweets per minute were registered on Twitter during the TV-release of the first film in July 2013.

Probably the most beloved and treasured scenes of the franchise? Going shark hunting with a chainsaw: